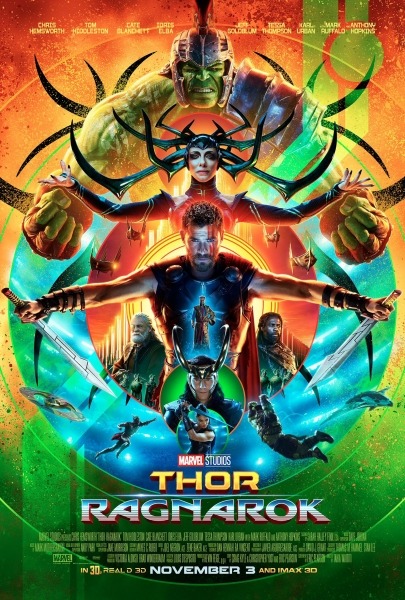 Went and saw the new Thor movie and the visuals were amazing. The movie is absolutely gorgeous. The effects are pretty fantastic and Chris Hemsworth is as always a god among men (lol). In all it’s a really fun movie and I would say it’s pretty great. Anthony Hopkins was great, Tom Hiddelston was really fun and nice to see again, Cate Blanchette was really cool too. the look in her eyes through the movie was chilling. The main problem with the film is that it can’t seem to find it’s tone. The other Thor movies haven’t been very successful compared to Captain America and Iron man and this one felt like an attempt to revamp it’s image. The movie kind of teeters between epic action movie and comedy. It’s not bad but it never picks one over the other and so the whole time I felt this kind of awkwardness. The comedy was sometimes awkward and felt forced or out of character at times. That aside it was always funny, even when it was awkward The movie has a very light-hearted feel to it also. In all I would say it’s still really enjoyable.

Movie Posters : In The Earth2021, Ben WheatleyPoster by Jay Shaw

Infographic Design Inspiration – Should your business be on Pinterest?...

Movie Posters : "Today’s Quote: “True art is characterized by an...